The wonderful Jennifer Crispin of indie press Dancing Star Press was recently kind enough to take our Q&A challenge. Many thanks to Jennifer for taking part!

1. Why publishing? Or, to put it another way – if, a decade ago, you were asked the question: ‘What do you see yourself doing in ten years’ time?’ would you have answered ‘managing an independent press’?

Absolutely not! Ten years ago my husband and I were managing a small camp, and just starting to come around to the idea that it might be something we did as a career — indefinitely. But a love of books and reading has always been a huge part of my life — and even then, managing a camp and caring for a three-year-old at home, I was reading all I could and reviewing books on my livejournal (remember those?).

I think I always bought into the idea that I had to be “practical” in choosing a career, and that publishing was for people who went to expensive colleges and lived in New York City. As soon as I saw that people were doing this at a micro press level — that you could jump in with a shoestring budget with nothing more than attention to detail, a love of books, and some integrity in your relationships with authors — well, it became an idea that took over my brain.

2. On your About page you state: “Our mission is to publish speculative fiction that shows that not only can dragons be beaten, but so can oppressive governments and other forms of social control. We believe in finding hope in the apocalypse, joy in a dystopia, and people and peoples finding their power.” Was figuring out your mission straightforward, or did it take you a while to formulate?

I knew my mission organically, I knew it long before I had decided that it was something I could actually do. Putting it into words, however, was quite another matter!

3. You’re based in the US and relatively new to the publishing scene. What can Dancing Star Press offer readers and writers that other SFF publishers can’t?

I am so very very new! Right now I only have the one book on offer (A Ruin of Shadows), but of course I hope to build on that. I think anybody who gets into publishing gets into it because they see a void. It’s certainly true for me. I can’t tell you how many hours I’ve spent in SFF sections of bookstores, looking for something that I can’t find. Part of that’s novellas — outside of Tor’s novella line, there are very few people publishing novellas in any genre. And another part of that is new stories, new representation, new cultures. I’m not here to read another new far-future science fiction story where the people in power and their social structures look exactly like the people in power now. I’m not here to read another story where women exist mostly so we can imagine their boobs in zero gravity, or as a redemption narrative for the male main character. I want to see something new. And I hope that others will come to find that at Dancing Star Press.

Again, I’m just getting started, but I’ve been so grateful for all the helpful folks I’ve found. Every time I have some nitty gritty question that I feel vaguely embarrassed of having to ask, there’s been someone willing to share their wisdom or their struggles. 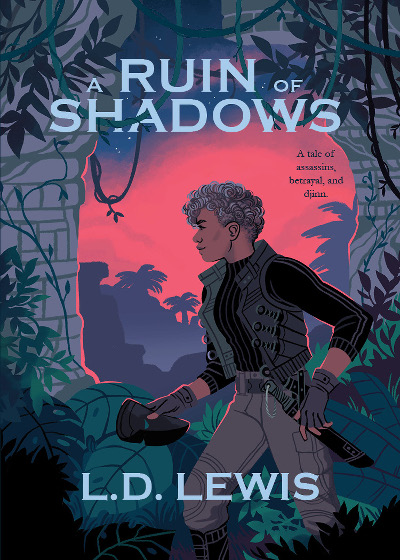 5. Your first book A Ruin of Shadows by L.D. Lewis seems to have got off to a great start. Can you tell us about it?

A Ruin of Shadows is such a great example of the kinds of stories I want to read but I wasn’t finding on the shelves at the bookstore. First of all, the protagonist is General Édo, an older black woman who gets to be an unmitigated badass. There’s no narrative of suffering and prejudice and the overcoming of it. She is the scariest assassin on her entire planet, and her skills have propped up an entire empire — an empire she eventually comes to decide is no longer worthy of her. When she decides to seize her power for her own self, the reckoning that comes is just deliciously satisfying.

6. And how did you come to publish it?

I was blown away by the short story “Chesirah” in the first issue of FIYAH litmag, and I reached out to the author, L.D. Lewis. She didn’t have any novella manuscripts, but she had two longer short stories that she thought could be extended easily, so she sent them over. I instantly fell in love with the story that became A Ruin of Shadows.

7. Which leads me nicely on to submissions. You’re specifically seeking for speculative fiction novellas. Why novellas?

Listen. I blame Melville House. I have always loved tiny little perfect books, just as objects, but it wasn’t until I discovered Melville House’s The Art of the Novella series that I really thought about novellas as their own form. I think they’re perfectly bingeable — easy to read in a single day, if not one sitting, but then you’re done. Short story collections often make me antsy, because you invest in a story, but then 20 pages later, that story is done, and they are asking you to invest in something completely new? No. A novella is a whole world, a whole story, distilled down to its essence, but still an entire book in and of itself. Novellas and short novels aren’t the only things I read, certainly, but they are where my eyes are mostly easily drawn at the bookstore.

8. The current reading window is: 1st October to 31st December. What makes a submission ‘zing’ for you?

I get excited by manuscripts that promise to take me to a world I haven’t seen before, and characters who are motivated by a sense of justice (outraged or misplaced or unreasonable or not!). I love science geekery and I like a little swagger. I love fantastical elements, but they have to feel grounded in the world that they’re in. And this may not be sexy, but what I really want are consequences — characters who are the way they are because of things that have happened to them, political structures that are what they are in reaction to what went before, worlds that are what they are because of some past catastrophe, or new discovery, or both.

9. How important to you is a submitting author’s fanbase/following? Is it something you consider when mulling over which manuscript to take forward to publication?

I look at it, but I don’t think that it’s the deciding factor alone. Part of my personal mission is to publish people who are just getting started and building an audience, so I’m not expecting a built-in audience of tens of thousands or no go. That said, I do want to see that the author is making an effort in some way, to engage in community with writers, readers, fans. It’s not that I would refuse to publish an author who was reclusive, but it would certainly enter into my calculations as to what I think I could realistically do for them, especially as I am just starting out.

10. What has been one of your greatest challenges of running the press? And greatest successes?

The greatest challenge has definitely been finding the stories I want to publish. I am always second guessing myself! There are stories that I’ve liked, but felt I had to say no to for one reason or another, only to feel haunted weeks or months later and accuse myself of being too conservative. Of course, saying yes is its own kind of stress, too! When I fall for a story, I want only the best for it and its author, and so I worry about every detail.

The greatest success has been how well A Ruin of Shadows is selling so far! Just starting out, I had really planned for a much slower burn. I had hoped to earn back publication costs within a year, maybe sell out the first print run in three. But everything has been going much faster than I ever expected!

11. Do you solely work on managing the press, or do you have other employment?

Oh, what a loaded question! Let’s put it this way. I quit my day job a little over a year ago. I am not currently paying myself anything at all out of press funds. I would like to get there eventually, sure, but realistically, it will probably be a few years. Thanks to some good (and some lucky) decisions over the years, my family is currently in the position where we can be supported by my husband’s salary. It’s an incredible privilege, and I hope I can use it to benefit those beyond just myself (particularly up-and-coming authors!).

12. Any hard-won wisdom (about life or publishing!) that you’d like to pass on?

If you’re in the U.S., you can go to the post office and pick up a book of tracking number stickers. Then you can just slap one on each package and drop it off in the nearest blue box (with appropriate postage, of course) and be able to track your packages while still restricting your trips to the post office to the occasional restock of postage. You probably wanted something deeper, but this blew my mind, and made me so happy.

No, listen. Like in all areas of life, the library is your friend. I had no idea of all the resources they had that were so essential to me getting started. Free marketing seminars, and access to demographic databases, and free access to hundreds, if not thousands of online courses in everything from marketing and websites to typesetting and cover design. Even a few literal free lunches along the way. They’re doing so much more than anyone ever gives them credit for, even lifelong library advocates like me.

13. How can we best find out more about Dancing Star Press? Anything exciting coming up?

Go to the website for information on submitting, and on how to order A Ruin of Shadows. There is an official Facebook page, and I have Twitter and Instagram accounts @greeniezona, though both are a mix of personal and press. The Twitter account manages to stay a bit more on topic, while the Instagram account is about half books I love, half beadwork, with the occasional plug for my press.

14. Lastly… tea or coffee, chocolate cake, or the chance to make beaded things? (!)

But! All of those things go so well together! Lately I have been spending an excessive amount of time at my beading table, generally with a cup of tea by my side. I would happily give up chocolate cake forever in order to gain an unending supply of tea and beads. Just don’t make me choose between the tea and the beads, please!
Please follow and like us: